Photographers from Germany, Canada, and US Honored

SDN is pleased to present the winners of the 2011 SDN Call for Entries, Ten Years After Nine Eleven: Searching for a 21st Century Landscape. Four exhibits were selected for awards.

First place award went to photographer Garth Lenz of Canada who was honored for his work on the environmental degradation caused by the Alberta Tar Sands, one of the United States' largest sources of oil.

Michael Robinson Chavez of Los Angeles for his work on the metamorphosis of the Arab world over the past ten years;
Florian Büttner of Berlin for his work on modern slaves of Dubai;
Michael Busse, also of Berlin, for his depiction of commercial exploitation of land in Belgium.

The winning work was exhibited at powerHouse Arena in Brooklyn, NY from August 20, 2011 through September 16, 2011. An opening reception is scheduled for September 10 from 7 to 9 pm.

"These four exhibits provide insights into how the world has changed since 9/11," said Glenn Ruga, SDN Founder and Director. "The winning photographers document the high environmental cost of oil in North America; the tumultuous changes since the September 11 attacks in Iraq, Israel and the Palestinian Territories, Lebanon and Egypt; the foreign laborers building the skyscrapers of Dubai under stifling conditions; and the ravages of commercial exploitation and quick profitability in a Belgian town.

Canada's Tar Sands and the True Cost of Oil 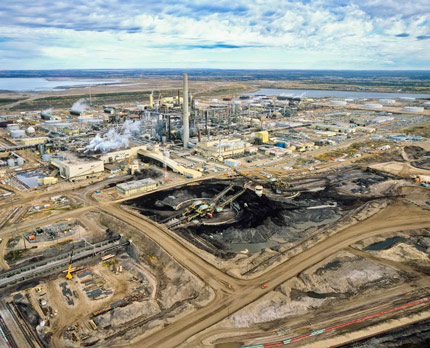 SYNCRUDE UPGRADER AND TAR SANDS / Alberta Tar Sands | 2005
The refining or upgrading of the tarry bitumen which lies under the Tar Sands consumes far more water and energy than conventional oil and produces almost twice as much carbon. Photo by Garth Lenz.

Garth Lenz is a Fellow of the International League of Conservation Photographers. He was recently awarded second and third prize in the photojournalism /environment category of the Prix de la Photographie Paris- PX3- Competition. Garth's photography of environmental issues, threatened wilderness regions, deforestation, and the impacts on indigenous people has appeared in many leading publications such as Time, the Christian Science Monitor, the Guardian Sunday edition, the New York Times Sunday edition, Sierra Magazine, among others. Garth has made many presentations on environmental and indigenous rights issues and has appeared before the European Parliament and the Canadian Senate.

"Garth's submission embodies the best work on SocialDocumentary.net. Not only are the photographs stunning portrayals of both beauty and its antithesis, but Garth is also an environmental activist, using his artfullycrafted images to educate and make change," said SDN Founder Glenn Ruga.

Garth's work from the Canadian boreal and the Alberta Tar Sands has won recent major awards at the International Photography Awards and has appeared in recent issues of Canadian Geographic, GEO Germany and GEO International.

The Alberta Tar Sands, one of the world's most environmentally damaging and toxic projects, represent the world's second largest oil reserves, and are America's single largest source of oil. Since September 11, 2001 the resulting high cost and demand of oil, and the desire for "secure" oil not from the Middle East has led the United States to promote and make possible the creation of this massive development.

The neighboring Peace Athabasca Delta, the world's largest freshwater delta, and the surrounding boreal forest, are being systematically destroyed to mine the tar that lies underneath. Plans are to increase production of the Tar Sands from 1.5 million barrels to five million barrels of oil per day within the next 20 years, industrializing an area the size of Florida in the process. The boreal forest is the world's greatest carbon sink and Tar Sands oil produces almost twice as much carbon as traditional sources.

Metamorphosis: Images from the Arab World 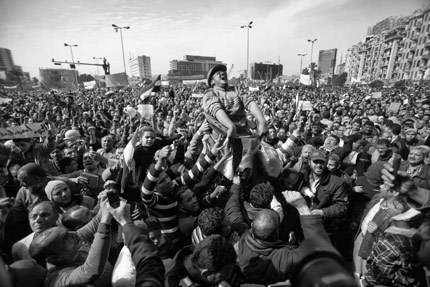 Jubilation filled the throngs of protesters that gathered in Tahrir Square to celebrate the fall of the Mubarak regime. The youth of Egypt felt empowered by their ability to change the course of their nation's history. How much of the region will follow their lead? Photograph by Michael Robinson Chavez

Michael Robinson Chavez has been a photographer at The Los Angeles Times since 2007. Prior to that, he worked for The Washington Post, The Boston Globe and the Associated Press. He has covered wide-ranging national and international assignments in over 45 countries including: the Congolese Civil War, the 2010 earthquake in Chile, the revolution in Egypt, life in India's slums, economic decline in the United States, the 2006 Hezbollah/Israeli war, the Georgian/Russian war in 2008 and the US led invasion and occupation of Iraq.

His work has been exhibited widely. He has recently published a book of his photographs from Peru: "Awaiting the Rain". He has lectured and taught workshops in Cuba, Mexico, El Salvador, Egypt, India, Peru and the United States.

After September 11, Chavez was sent on many assignments to cover Iraq, the 2006 war between Hezbollah and Israel, the Israeli incursions into Gaza and the West Bank, and most recently the Egyptian revolution.

A common thread through all of these assignments, in the post 9/11 world, was the attitude towards America, American behavior in the region and the occupation of an Islamic nation. At the same time autocratic regimes, supported by the United States and following a long discredited and corrupt Arab nationalistic model, fell in Tunisia, Egypt and currently in Yemen.

"It was a fascinating nine years covering the region, and the next decade promises to be equally enlightening and challenging," said Chavez.

The Arab world is in a major state of flux: a new generation of youth are taking to the streets and cyberspace changing regimes in Tunisia, Egypt and threatening other autocratic leaders in Yemen and Syria. Israel, warily watching these changes, is feeling increased pressure from the Obama administration to restart the peace process with the Palestinians.

These photographs are a small window into four countries that have experienced tumultuous change since the September 11 attacks: Iraq, Israel/Palestinian Territories, Lebanon and Egypt. Iraq felt the wrath of American vengeance most acutely. Eight years on, US troops are still present in the country. Lebanon and Israel continue with internal turmoil and a war fought between the two in 2006. The fall of the Mubarak regime is the most recent and powerful reminder that a youth movement and thirst for democracy is in full bloom during the current "Arab Spring."

"These are strong images that reflect a conflict longer than 9/11 but one which became more complex after the NYC disaster," said Tomaszewski. 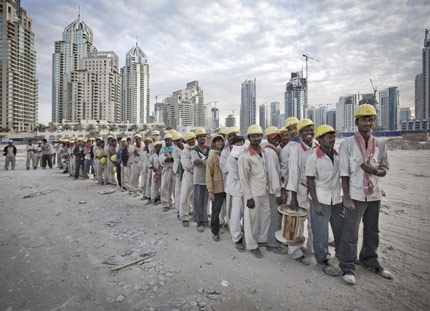 The workers are waiting for the bus to bring them back to the camp after a hard day of work in the heat of Dubai. Photo by Florian Büttner

Berlin-based Florian Büttner's photographs have appeared in GEO, GEOlino, Playboy, Financial Times Deutschland, Maxim, Spiegel-online, among others. He won second place in the Prix de la Photographie de Paris", political, amateur category in 2008. He was nominated for "World Press Masterclass" in 2008 and 2009.

Büttner spent two months in Dubai, walking the city and its construction sites and also spent some time in a labor camp. "It is a dusty, hot and soul-less city with the most glamorous right next to the poor that have built it." said Büttner.

Higher, greater, more luxurious, Dubai is set to become the world metropolis of architectural wonders and records. This is only possible to achieve with the sweat of a gigantic labor army from abroad. Hundreds of thousands of these foreign workers labor on the construction sites for very low wages and live pent-up in tiny barracks, separated from their families for years.

This is a photographic documentary about the everyday life of the men with the overalls. The men outside the lap of luxury, who exist in the shadows of the skyscrapers.

They have been the cheapest on the market and the ones most driven to abandon their rights to make a living. They are, according to Büttner, modern slaves. Not taken by force like in the old days, but forced by their lives in the arms of the highest bidder for human resources.

Of the nearly 1 million people living in Dubai, approximately 800,000 are or were foreign workers. This is a new dimension in the history of foreign labor and shows one aspect of globalization. In Dubai you can find a "visual landscape" that formed the beginning of a new wave of exaggerated architecture and ambition. Dubai is part of the "rich" half of the Arab world that turned closer towards the west after 9/11 and went a step closer to their new allies and investors. Now the financial crisis seems to have stopped most of the projects and most of the workers have probably been sent back to India or Pakistan or Bangladesh--back home to their families, which they haven't seen for years, but that they can no longer support. They are probably waiting for their next chance in Abu Dhabi or Kuwait or Bahrain.....

"This is strong work and a very relevant statement about the last decade," said Amy Yenkin from Open Society Institute. 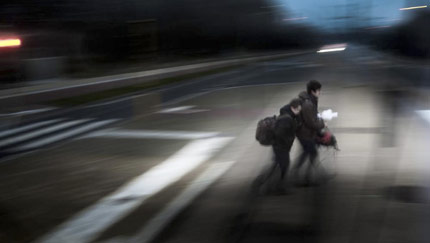 After School. Photo by Michael Busse

Michael Busse is a Berlin-based photographer. "Unidentified Landscapes" is a portrayal in 24 frames of the journey through a city in smithereens with fragmented illusions of nature--distorted images of a disintegrating world, where perspectives begin to shift and where there is a fascination with ugliness and an aversion to a coastline dedicated to land and real estate speculation. Against this backdrop of concern with pure profitability, people move about like tolerated guests.

"These are thought-provoking images that speak to the world so many people are living in today, " said Lori Grinker. "Beautiful, scary and intelligent, a pure celebration of photography," said Tomaszewski.