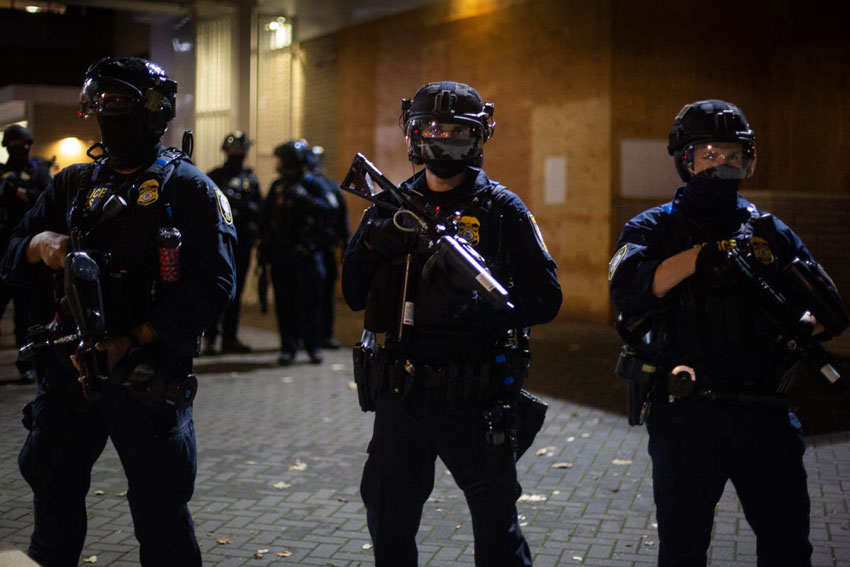 Following the murder of George Floyd on May 25 in Minneapolis, demonstrations—largely organized by Black Lives Matter—broke out across the United States. Portland, Oregon has since remained a hub of these protests, many have often turned violent. The demonstrations have escalated to be against all manifestations of the state including prisons, the police, and institutions of capitalism. While only a small percentage of demonstrators are engaged in violence, the police have turned their tear gas, batons, handcuffs, and nonlethal munitions on not only violent demonstrators but also journalists, peaceful protesters, and bystanders.

Maranie Rae Staab has been documenting these violent clashes, and counter demonstrations by the Proud Boys and other white supremacist groups, and has been posting her work to her Twitter feed, Instagram, and in national media. 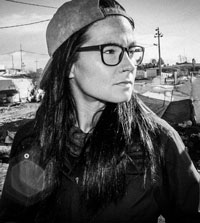 Maranie is an independent photographer, videographer and journalist. Her work focuses on human rights and social justice issues, displacement, social movements and the impact of conflict on individuals and society. Maranie strives for visual intimacy, to establish the trust necessary to get close to people and their experiences and to then share this with others. Given the option, Maranie prefers long-form documentary and often incorporates extensive text in her projects. A 2020 Pulitzer Center Reporting Fellowship recipient, Maranie is a proud alumni of the Eddie Adams Workshop, winner of the 2019 Northern Short Course Student Photographer of the year, winner of the 2019 Best of Photojournalism Emerging Vision prize and the first recipient of the Ed Kashi Fellowship at Newhouse, Syracuse University. https://www.maranierae.com/

Candlelight procession at the Lekki Tollgate in loving memory of the victims of the extra-judicial killings in Nigeria.

The ENDSARS protest in Nigeria started on October 8 via Twitter calling for banning of the Special Anti-Robbery Squad (SARS), a unit of the Nigerian Police Force, known for oppression and brutality. The protests started as a social media campaign using the hashtag #ENDSARS to demand that the Nigerian Government disband the notorious unit. On October 8, a group of protesters spent the night outside the Lagos state government house in Alausa, and since then the protesters have camped at the spot while the protest spread nationwide. On October 13, the Nigerian Police Force PRO announced the dissolution of SARS and the formation of SWAT to fill the gaps arising from the dissolution of SARS. But the protesters did not stand down claiming this is just a ploy to get them to stop the protest and also that the SARS operatives involved would just move to the new outfit and continue their brutality against citizens. The government has continued to violently repress protests despite the announcement, culminating in the Lekki Massacre on October 20  when, without notice, the Nigerian military opened fire on thousands of people, killing 12, who were peacefully calling for good governance and an end to police brutality.

Benson Ibeabuchi is a freelance photojournalist based in Lagos, Nigeria who has been covering the #endsarsnow movement since it began as peaceful protests against excessive use of police violence and turned deadly when the police fired live ammunition on peaceful protestors on October 20. 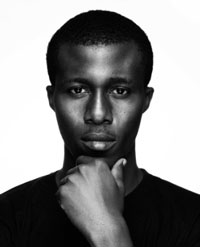 Benson is a keen observer of humanity with an intense interest in capturing and retelling stories from perspectives that are often overlooked. He is a member of African Photojournalism Database (APJD) a joint project by the World Press Photo Foundation and Everyday Africa. His attention to detail has led him to work with organizations such as The Nigerian Pavilion for the 57th Venice Biennale Art Festival, LagosPhoto Festival, DIA Fund, Diaspora Rise Up, YIAGA Africa, AYADA Lab, among others and has been exhibited at the first Canon Alumni Exhibition as well as at the Alliance Francaise Lagos for their 2018 World Music Day Exhibition. Benson’s images have been featured in AJ Stream (Aljazeera Stream), The Sole Adventurer, Nataal, IAM Magazine Nigeria and Art Africa. https://www.bensonibeabuchi.com/endsarsprotest