Funded!
A workshop on how to find funding for your documentary project

Listen to Michael talk about this class.

Funding.  It’s perhaps the single biggest hurdle that many documentary photographers face.  This two-day workshop will demystify the world of funding and provide you with the tools, knowledge, and examples that you need to get your project supported and get your story told.

The course will explore secrets to success in identifying  grants, awards, fellowships, fiscal sponsorship, partnerships, commissions and writing compelling proposals.  Snyder will share his tips and successful examples from his work and other professionals.  Students will learn and practice how to write a project narrative and sequence a images for submission to a grant.  Snyder will review these applications, providing feedback to the group.

The course is taught by Michael O. Snyder. Michael has been an independent photojournalist and filmmaker for over 10 years and has consistently patched together a network of funders and partners to achieve success in his projects. 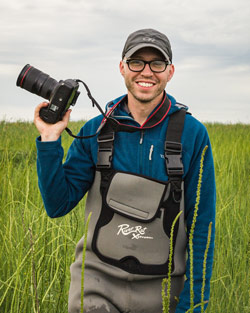 Michael O. Snyder is a photojournalist and filmmaker who uses his combined knowledge of visual storytelling and conservation to create narratives that drive social change. He is a Climate Journalism Fellow at the Bertha Foundation, a Portrait of Humanity Award winner, a Decade of Change Award winner, a Blue Earth Alliance Photographer, a Society of Environmental Journalists Member, a National Geographic Contributor, and a Resident Artist at the McGuffey Art Center in Charlottesville, Virginia.  He holds an MSc in Environmental Sustainability from the University of Edinburgh, Scotland and a BSc from Dickinson College.

Through his production company, Interdependent Pictures, he has directed films in the Arctic, the Amazon, the Himalaya, and East Africa.  His journalism work has been featured by outlets such as National Geographic, The Guardian, The Washington Post, VOX, BBC, PBS News Hour, Roads & Kingdoms, High Country News, Condé Nast, Orion, and NPR. His films have been selected to over 50 festivals and have taken home numerous awards.

An adventurer at heart, Mike has hiked the Appalachian and John Muir Trails, cycled across Europe, and ridden trains through Siberia. Originally from a small town in Appalachia, Snyder has lived around the world including long-term stints in Scotland, Japan, Hawaii, and New Zealand.  He currently resides in the shadow of the Blue Ridge Mountains of Virginia with his wife and two children.