Invisible Solitudes - Life at the Edge of Mental Health 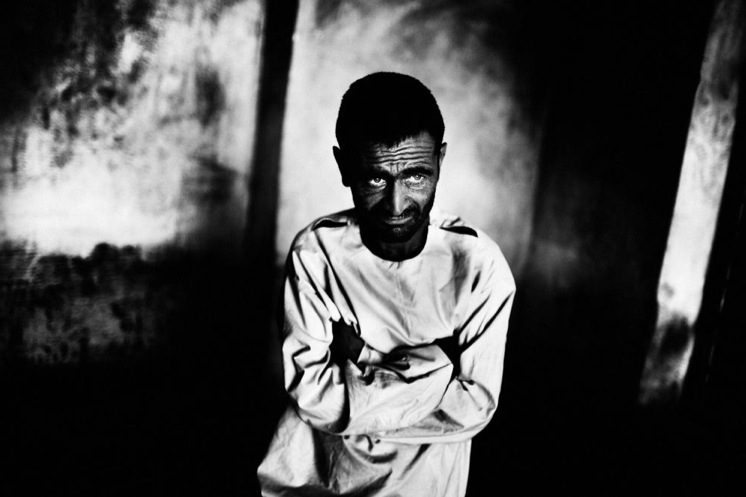 On the occasion of the 46th National Conference of the Italian Psychiatry Association (member of the World Psychiatry Association) and in conjunction with the World Mental Health Day 2012, the photography exhibition "Invisible Solitudes - Life at the Edge of Mental Health" aims at putting a face onto the faceted nature of mental illness in different parts of the world.

The exhibition is a selection of thirty photographs by six professional photographers, published on SocialDocumentary.net (SDN,) a website for photographers, NGOs, editors, journalists, lovers of photography and anyone else who believes that photography plays an important role in educating people about our world. The stories selected present an intimate look at psychological suffering and how it expresses itself according to different socio-cultural contexts. At the same time, they aim to denounce the causes of such suffering, as well as the ignorance and the silence surrounding it.

The documentary photographs touch upon a range of themes, from the invisible consequences of war in Afghanistan as portrayed by Diego Ibarra Sanchez, to the terrible legacy of Agent Orange, shot by Catherine Karnow in Vietnam. Jenn Ackerman toured penitentiaries in the United States, while Steve Davis captured the last days of a Seattle-based institution for the developmentally disabled. Magdalena Sole’s journey to Japan explores its hidden secret, homelessness in Kamagasaki, while Enrico Fabian’s work on prescription drug abuse in India shows the other side of the “pharmacy of the Third World.”

In a single image, the lens portrays some of the world's most predominant contemporary social issues, focusing on their psychological dimension. Choosing to observe, instead of turning our eyes away, allows us to immerse ourselves in fragments of lives marked by an illness that only appears secondary to the tragedy in which it develops, such as war, poverty, and other societal deprivations. Only by looking at these pictures can we achieve awareness of these illnesses, and overcome the stigma surrounding them.

*The event is restricted to those invited to attend the opening ceremony of the 46th National Conference of the Italian Psychiatry Association.

The continuous withdrawal of mental health funding has turned jails and prisons across the U.S. into default mental health facilities. The system designed for security is now trapped with treating mental illness and the mentally ill are often trapped inside the system with nowhere else to go. The project portrays the daily struggle inside the walls of the unit redesigned to treat mental illness and maintain the level of security required in a prison.

The photos take viewers into an institution where the criminally insane are sometimes locked up in their cells for 23 hours a day with nothing to occupy their minds but their own demons. Ackerman’s intention with Trapped was to spark calls for reform for the treatment of the mentally ill and the prison system in the US.

Jenn Ackerman is an American documentary photographer based in Minneapolis, Minnesota. In 2012, she was named a 2012 McKnight Fellow and one of PDN’s 30 New and Emerging Photographers to Watch. Her photographs have been recognized by the Inge Morath Award, Magnum Expression Award, CENTER Project Competition, Photojournalism Competition on Human Rights, Emerging Photographer Fund, the PGB Photo Award, the Honickman First Book Prize and others. Trapped was named Non-Traditional Photojournalism Publishing Project of the Year and the project’s short film won an Emmy. 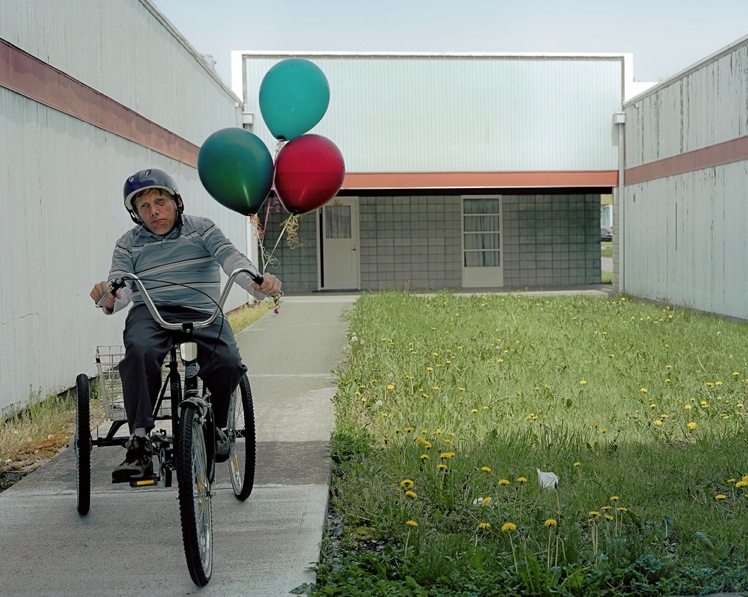 The Rainier School is a state operated institution for the developmentally disabled, not far from Seattle at the base of the beautiful Mount Rainier. The school at the Rainier School disappeared years ago. There are no young people. Many of its residents have lived there for their entire lives. They have been betrayed by their minds, and in many cases, their bodies. Most of its residents are now elderly, and this extensive campus (complete with pool, bowling alley, restaurant and its own farm) is now home to only about 370 people, about 20% of its peak capacity.

My objective was to document the final days of a school-turned rest home. In one sense, it is a carefully monitored prison. In another sense, it is a charming country club. Nowadays, as we avoid the institutionalization of the developmentally disabled, the Rainier School and many similar facilities are the victims of our social progress. These images represent the end of a major public commitment, and the unique culture it created.

Steve Davis is a documentary portrait and landscape photographer. He is a former first place recipient of the CENTER's  Project Competition Award, and received two Washington Arts Commission/Artist Trust Fellowships . His work has appeared in Harper's, the New York Times Magazine, and is in many collections, including the Houston Museum of Fine Arts and the George Eastman House. He resides in Washington State, and is represented by the James Harris Gallery, Seattle. 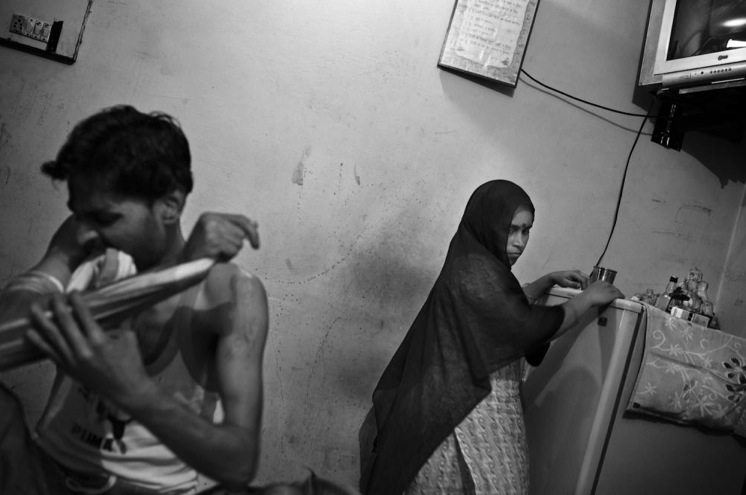 “Since my mother died everything has changed to the worse. If it wasn't for my two small children, I would have committed suicide a long time ago. These damn drugs, this damn medicine…”, commented Fakir, crying about his loss and life, sitting lonely in his small room of the family’s house. The plastic tube which entangled his arm tight, making the injecting easier for him, seemed like an allegory for his life, a life in stagnation, being stuck – Phas Gaya.

India, also known as the pharmacy of the Third World, is one of the biggest producers of generic drugs worldwide. The vast variety are up to standard and, most importantly, are affordable pharmaceuticals that give millions of people the chance to treat their illnesses. But the lack of trade monitoring, the constantly increasing amount of producers, the cover-up through corruption and the ignorance and greed of the pharmacists have also gotten these medicines, meant to heal and to help people, into the wrong hands.

Enrico Fabian is a German born freelance photographer, currently based in New Delhi, India. His work was published in publications such as Stern, FOCUS, the New York Times, The Hindu, Tehelka and The Caravan, among others. In 2011, UNICEF nominated his work on children and pharmaceutical drug abuse in India, Death for 50 Rupees, for the Picture of the Year Award. Phas Gaya – Being Stuck was the winner of SocialDocumentary.net’s 2012 “The Art of Documentary” call for entries exhibited at the New York Photo Festival. Both photo essays were awarded an Honorable Mention at the International Photography Awards in September 2012. Fabian continues working on Phas Gaya, after receiving the first Chris Hondros Fund prize in 2011. 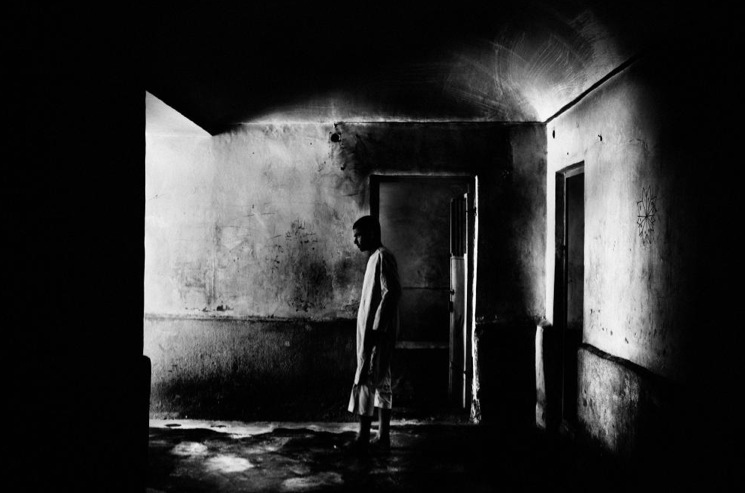 Abandoned, chained, forgotten… Mental patients in Afghanistan face the lack of resources to take care of them, while the political instability and the increase of drug addicts forced them to be forgotten. Ignorance and stigma accompany mental disorders. War and drugs have a catastrophic effect on health. Death, as a result of war, is simply the "tip of the iceberg." More than three decades of conflict have led to widespread human suffering and population displacement in Afghanistan. The effects of war include long-term physical and psychological harm also resulting in drug addictions.

While mental health treatment in Afghanistan has improved in cities, many rural communities still send patients to shrines, where they may be chained, neglected and poorly looked after. Shrines offer a draconian approach to mental illness. They offer them ancient rituals used for centuries to heal mental patients and to exercise evil spirits. According to local beliefs, mental illness is labeled as being possessed by an evil spirit known as “jinn.”

Diego Ibarra Sanchez is a Spanish documentary photographer. He started his career as a photojournalist in 2005, working for the Argentinian newspapers El Territorio and La Nacion. He then traveled to Bosnia, Colombia and Algeria for various photographic projects, before settling in Pakistan, where he has been living and working since 2009. He is a member of Cordon Press/Corbis photo agency, and his work was published in the New York Times, Libération, El Pais and El Mundo, among others. His feature story on mental illness in Pakistan was the winner of its category at the International Photography Awards, and Invisible War Consequences won SocialDocumentary.net’s 2012 “The Art of Documentary” call for entries exhibited at the New York Photo Festival. 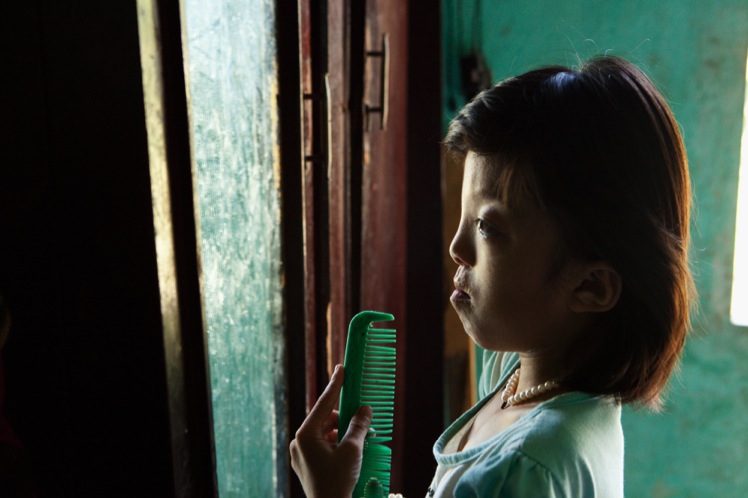 This is the story of the lives of two families who struggle with diseases associated with Agent Orange. During the Vietnam War, the U.S military sprayed nearly 12 million gallons of the Agent Orange defoliant over Vietnam. Now, almost four decades later, the toxic herbicide continues to have a devastating effect on thousands of Vietnamese people. Passed down genetically, Agent Orange has caused various diseases and deformities in three generations of Vietnamese families. As an American, Karnow feels a responsibility to expose this horrifying problem, and to help bring about real change. Through photography and the voices of the victims and their families, Karnow knows that we can bring much more support than now exists. In a more immediate way, she can see the way that her photographs bring a sense of affirmation to these individuals who are suffering in illness and isolation. Karnow worked with the organization Children of Vietnam, who helps these families enormously. Quite simply, they address the specific needs of each child and each family. Although the United States government is finally addressing this issue, it is hoped that imminent funding will help more of the victims of Agent Orange.

Born and raised in Hong Kong, the daughter of an American journalist, San Francisco-based photographer Catherine Karnow works for National Geographic, National Geographic Traveler, Smithsonian, French & German GEO and other international publications. She has also participated in several Day in the Life series, Passage to Vietnam, and Women in the Material World. In 1994, she was the only non-Vietnamese photo-journalist to accompany General Giap on his historic first return to the forest encampment in the northern Vietnam highlands from which he plotted the battle of Dien Bien Phu. She also gained unprecedented access to Prince Charles for her 2006 National Geographic feature, “Not Your Typical Radical.” 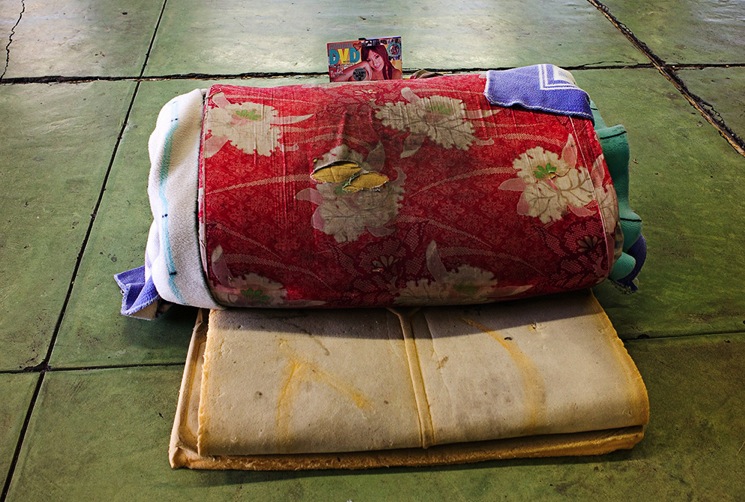 Kamagasaki, Japan is home to an aging population of day laborers and homeless men who came from all over Japan looking for construction jobs and a new identity during Japan’s economic boom. Today, Kamagasaki is home to remnants of that era, aging men mostly in their 60s. With few jobs left, many take to peddling, gambling, or just waiting. The neighborhood is marred by homelessness, poverty and declining health. Osaka residents shun the area. Kamagasaki hosts 60 Yakuza syndicates that deal drugs, run gambling and prey on welfare recipients. As forlorn as Kamagasaki might seem, it is quintessentially Japanese. Men living in cardboard boxes arrange their shoes as if at a fine inn. Every evening they head to the public bathhouse. Though outcasts, these men project the core values and vitality of a polite, respectful, highly organized Japanese society.

Magdalena Solé, a New York City-based photographer, was born in Spain during the Franco dictatorship. No stranger to transition, her family left for Switzerland when she was seven, where she grew up and entered college. She holds a Masters of Fine Art degree from Columbia University. She now lives in New York with her husband and son. Her photography book New Delta Rising,published by the University Press of Mississippi, won the Silver Award at the 2011 PX3 Prix de la Photographie in France.